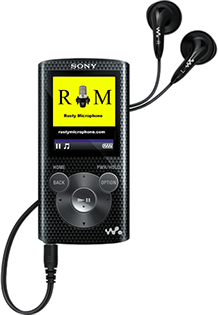 All podcast downloads are FREE.

Take a look at the titles below,

36 The Cause of All Illness

We discuss the works of Gaston Naessens and Doctor Hamer's "New German Medicine."

A look at the nuclear industry

38 Can Science Learn From

A look at the synthesis between Science and Religion.

An in depth look at the nuclear industry.

This is related to the podcast on Science 2.0. Do human thoughts affect physical things?

Will we really need web developers in the future?

Someone pulled away from the gas pump with the filler tube still inside!

No one uses tape recorders any more. Here are two great field recorders.

This is related to my podcast on The Art of Dowsing.

This man has re-invented the iPod with an interesting approach to portable music.

07 How to Become a DJ on a Shoe String

This is a very technical article on being a Disk Jockey and doing a party.

This is another scam by car makers to make you pay more money to mechanics.

How to repair a broken OttLite.

11 A KVM Switch That Just Works

A review of the Connect Pro line of KVM Switches

Why do they Fail?

Combine sound from multiple computers into one set of speakers.

A series of lectures giving you the foundation of Gnostic teachings.

"Thank you so much for your efforts! What you say in your podcast 'Walter Russell's Wave, Beyond Genius and Kundalini' is truly inspiring as well as scary, as you stated... Thank you also for having introduced me to Walter Russell and thank you for the explications of his work provided by you and your guests.  Since then I have begun [the book] 'Atomic Suicide' and enjoy it very much..." H.M.

"I recently discovered your podcast, and am currently listening to your 'Gnostic Lecture Series' for a second time. Gems for sure.  And thanks for introducing me to Walter Russell - very interesting stuff..." E.B.

Tips and tricks on how to record audio using a computer and some simple equipment.

My guest Mr. Jim Taylor is a ham radio operator who will talk about “field day” 2009.

A Look at gardening in the city.

On this podcast, John McGarry, and Richard Roocroft talk about the things they remember when they were kids.

This podcast talks about human potential and the Global Consciousness Project

06 The Art of Dowsing

This is a podcast that teaches you how to practice this ancient art.

Electro-medical machines from the past and present. Are thy helpful? Find out.

A method of healing, with my guest Margaret Ball.

The Man Who Tapped the Secrets of the Universe.

10 Conversations With a Blind Man Part 1

John describes his life as a blind man while living at home.

11 Conversations With a Blind Man Part 2

Cliff Lorimer was a blind disk jockey who always worked outside the home.

Interview with David Oates, the founder of

The ins and outs of the Toronto Transit System

Richard Roocroft and E. Jim G. Ross Discuss what is happening to our world from a Gnostic point of View.

End of Season One

18b Walter Russell’s Wave, Beyond

A look at Alchemy

A look at the workings of “Hyper Space.”

A look at the life of Joan of Arc from the Gnostic point of view.

A look at the life of Paramahansa Yogananda and his book Autobiography of a Yogi.

A loot at hatred. Is it possible to remove hatred from our hearts?

A look at atomic energy

28 The Microcosmos and the

A look inside the human psyche

The X-15 Rocket Planes and UFOs

The atomic bomb on Hiroshima, and the war of 1812.

A look at cutting edge research that is

The Pistis Sophia, The Gnostic Bible

The Pistis Sophia, The Gnostic Bible

"Finally, I know what Kundalini is all about, so thank you so much for that. I really appreciate you laying it on the line! As you know, even the Gurus don't do that..." K.S.

"I listen to your podcast every morning. It is sublime. I wanted to say thank you and blessings for all that you do..." Bonnie

"Hello Rusty, Love your podcasts. I have four medical degrees and have been involved in the teachings of Walter Russell, E. Swedenborg and E. Cayce for some time now..." J.E.

Technical Note: If you experience a warning message about some files on the server being out of date, simply delete your browser's history. This website is powered by Adobe Muse. After every "update" this happens. RR